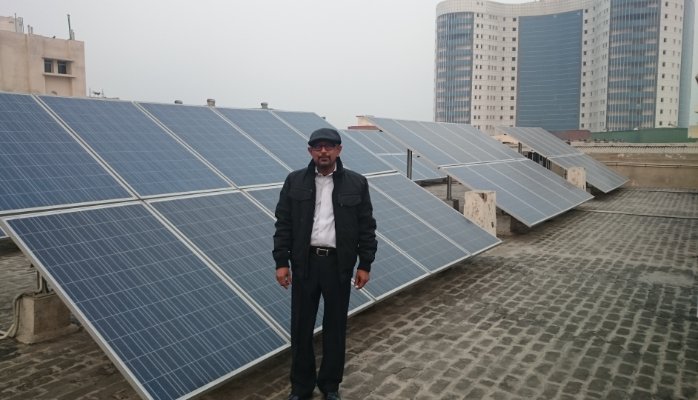 This is a delightful example of how an industrial unit at Rai , located at the outskirts of Delhi, is now reaping the benefits of lowered electricity cost, saving CO2 emission for the society and making best use of its roof top. It is also a responsible behavior towards our future generation from whom we have borrowed this earth for our sustenance Please note that whatever I am writing here is based on conversation on 17th December 2015 and the data supplied by the company owner Mr. Rakesh CHHABRA, located at 1806 -07, HSIDC Industrial Estate, Sonepat District, Haryana - 131029. The 40 KWp capacity solar unit installed at the Roof Top had started working in full-fledged manner by late January 2015. The solar roof top electricity generation unit is connected to invertor that supplies three phase, 415 volt electricity for the internal consumption of this industrial unit. The Enterprise manufactures seat covers for Honda, Maruti, Ford and other car producers in India. Historically for the year 2014-2015, the average electricity bill of this company has been about INR 125000-130000 per month. Once the 40KWp roof top solar unit began production of electricity from Feb 2015 onwards, the lowered electricity bill is between INR 85000 to 90000 per month. The Equity investment made by the owner for this solar unit, by last quarter of 2014, has already been more than recovered by way of direct tax savings for the company. The direct tax savings were equal to the 24% of the project cost in the first year itself. Life of the Roof Top unit is 25 years, so practically free electricity generation of an average of 4100 unit per month would be available for the manufacturing unit, once the project loan is fully paid off by 2020. The price of electricity charged to industrial customer in 2015, for Rai industrial customers in Haryana, is INR 8.2 per unit. Each year the Haryana Electricity Distribution Company (Discoms), the state government owned electricity supplier in this area, is securing a raise of tariff by 5-7 % by the Haryana Electricity Regulatory Commission (HERC), to be charged to Industrial units. It is estimated that by 2020, the price of electricity for industrial units in Rai will be nearly INR 11 to 12 per Kwhr. The 40 KWp roof top in 2015 saves about INR 35000 per month of owner’s electricity bill. This saving shall eventually gallop to about INR 47000 per month in 2020! And, it is going to be practically a free gift of solar power to a very Delighted owner of Solar Roof Top, for decades to come!

. 40 KWp Solar roof top saves > 25% electricity bill - Owner is delighted.
This is a delightful example of how an industrial unit at Rai , located at the outskirts of Delhi, is now reaping the benefits of lowered electricity cost, saving CO2 emission for the society and making best use of its roof top. It is also a resp... Read More